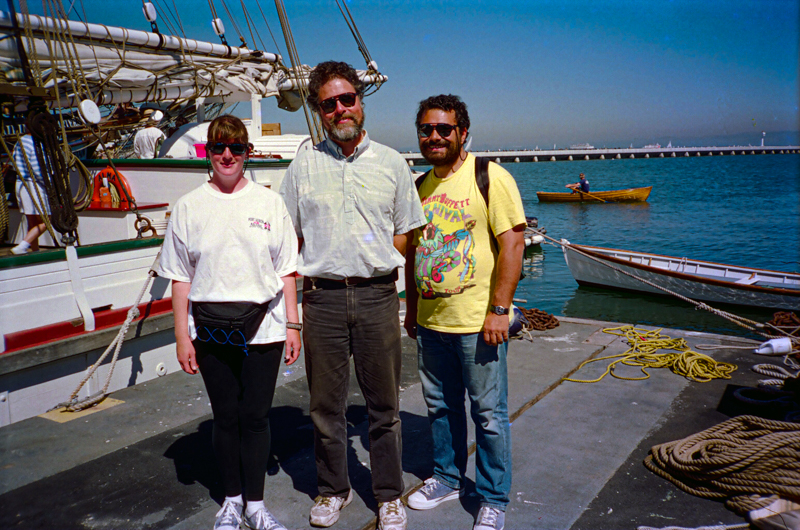 This is a story about two riggers, a badly measured piece of rigging, and the beauty that comes out of it.

On a recent Sunday I received a phone call from a close and beloved friend, Gordon. I knew what the call was about before I answered the phone.  For almost the entire previous year one of my best friends had been terminally ill. I knew that Gordon was calling to tell me that Brion had died.

In case you don’t know Schrödinger’s cat is a thought problem that Schrödinger purposed to Einstein as way to try to understand the thorny problem of quantum entanglement.  It involves a fictional setup of a box, a cat, some poison, and a quantum level event that may or may not release the poison. The absurd question is then “Is the cat dead or alive if no one looks in the box”?

Once I answered the phone Gordon told me the news that Brion had died the night before. I knew that by hearing Gordon’s words my entanglement with Brion had changed, that the knot of our friendship had untangled and I felt less secure and much more adrift in the world.

Brion and I had entangled lives, maybe not quite the idea of entanglement that Schrödinger was talking about, but entangled in many other ways. Brion and I worked together, trained in Aikido together, played music together, told stories to each other, and learned together. Maybe most importantly we loved and trusted one another enough to share our ideas, mistakes and disappointments.

I remember being at Brion’s loft one day and noticing way up on the wall a beautifully spliced, wormed, parceled, served, and leathered piece of wire rigging. The work was exquisite, and had to have taken hours. I commented on its beauty and the craftsman ship that had gone into making it.

Brion laughed and explained that it was a large mistake, that all of the hours that went into it were spoiled by the fact that it was two inches two short. He stuck it up on the wall an art piece. I suspect it also served as beautiful reminder that all of us make mistakes.

A few years later Brion was staying on board our boat. We were playing music and I noticed that Brion had a new strap on his bass guitar. It was to my eye one of the most exquisite and perfect guitar straps I had ever seen. The supple red leather was just the right width. Both of the edges were wonderfully perforated and carved with an amazing pattern that was at once a surface design and made the strap appear to have slight ruffles. I marveled at the strap and in my admiration blurted out: “Where did you get such an amazingly wonderful strap!” He laughed. Then he said; “Remember that piece of rigging that has hung on the wall for years, the one that was too short? This is the leather chafe guard that was sewn around it.”

Brion then showed me the back of the strap, which clearly showed the pattern of the galvanized wire pressed into it. This made the strap even better because it would not slip on your shoulder while you were playing.

We both laughed. We agreed must have been one of the most expensive guitar straps on the planet with all the labor that went into making up the rigging then cutting it off and making a strap out of it!  We laughed more agreeing it was one of the best straps that either of us had ever seen; but what an unreasonable way to make a guitar strap.

A few months later I visited Brion at his loft in Port Townsend.  Upon arrival he said he had a project for me if I didn’t mind.  As helping each other in our work was common between us I readily agreed. Brion then set up a double braided rope through the middle of his office, strung it tight, and handed me a piece of red leather.

Then Brion said; “You get to make a guitar strap like mine! The back pattern won’t be as good, but it will still be a great strap!” We laughed and my wife and I set to it, and had the chafe guard cut, punched and sewn in reasonable time. We left the soon to be guitar strap to stretch and settle overnight and all went to dinner together.

The next morning I removed the leather from the double braid, and was figuring out how to turn it into a guitar strap.  Brion interrupted me and said; “I have changed my mind on this whole thing. I am going to give you my strap, and then you can give me the strap that you just made. That way we will each have a strap that the other one of us made.” The brightness of both our smiles seemed to light the room.

That Sunday morning after I thanked Gordon for calling and telling me that Brion had died, I was unable through my grief to put a coherent sentence together.  I made a few awkward calls that I needed to make to tell people in our community that Brion was gone. I reached out and picked up that guitar strap and the instrument that was attached to it.

I played for hours just thinking of Brion. Although before he died he had asked me not to be sad when he died; I cried and sobbed through every note, unable to make sense of a world without one of my best friends in it.

I wasn’t listening to my music, I wasn’t paying attention to the notes, the key, the scales. I just had to somehow get my feelings out there in the world. My wife who was listening to the music said it was some of the most beautiful she has ever heard.

I do know that wonderful red ruffled leather guitar strap at times seemed to hold me up while I played that day.

Yesterday I received an email from a close friend whom I have taught a lot about rigging. It said;

“I am sorry to hear about BT. The legacy he left behind is not forgotten, as you continue to teach us dumb kids how to do it right. I just finished up teaching a crew of 9 guys from 4 different yachts to splice. As you said; “”Take care of the people first, let them learn and make mistakes, don’t be overly hard on them””. Show them how and it’s amazing how they are suddenly proud of what they can do. I actually felt like the captain today rather than crew. Thank you I couldn’t have done it without you.”

In thinking about Schrödinger’s cat that Sunday, when I answered Gordon’s phone call, I was missing the larger and more important idea of personal entanglement.  Brion is tangled up more meaningful in my life, than all the rope knots he shared. Those entanglements entangle others, and those even more.

Brion is alive through the things that he taught me without ever speaking the lessons. These are the things I strive to teach others around me. Perhaps Brion might agree the most important are these: We all make mistakes, and sometimes out of those mistakes come the most beautiful things.  Take care of each other. Teach other people, let them make mistakes and learn. Do not be overly hard on them or yourself.