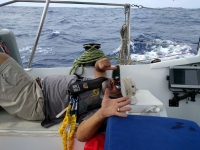 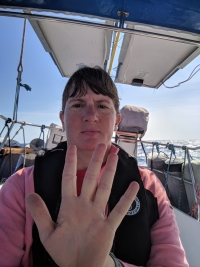 We have had a couple of adventurous days here on the sea. Aiki seems to be intent on keeping our problem solving skills in top form and practice.

The first one came as quite a surprise, but we appear to have sprung a water leak in the forward water tank yesterday; while it isn’t a super fast leak it isn’t trivial either. We are losing a lot of water out of it into the bilge and then it is being pumped overboard by the bilge pump. This isn’t a huge worry at this point as the aft tank holds 60 gallons and it is full. We did inspect all the connections to the tank, and as much of the tank as we can inspect. We could not find the leak, but it is hard to figure out where water might be flowing from when the seas are rolling the boat. So we will keep the forward tank filled up with the water maker, reserving the aft tank in case the watermaker quits. (This is not likely, but we like to have a backup plan for necessary safety issues, like water.) This will mean running the watermaker for about an hour every third day or so I believe instead of about once every week or every other week.

Second, our Cape Horn windvane, which we have named Jeeves, has been steering nonstop since we left, and doing a pretty good job of it too. Last night was the first time that we had a problem with him at all. We were sliding down a wave when another wave hit us from the quarter and pushed the boat around to the port. The part of the windvane self steering that sticks in the water has a system to pop off if it should ever hit an object so it isn’t damaged. The pressure of the sliding off the wave and the other wave starting to spin us caused it to pop off. We were able to retrieve it using the safety line that is attached to it, but in the process the part of the windvane that connects the oar mechanism (the part that popped off) was bent. We are not sure how it was bent, but it was bent. So we took it below and worked on it for some time eventually hitting it with a hammer to straighten it back out. We then reattached it while hanging over the stern of the boat, (safety tethers on of course. ) We trimmed the sails back in balance and Jeeves was soon steering again without any problems. 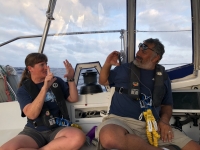 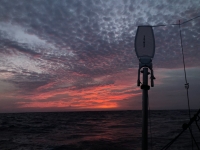 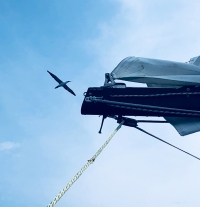 Third, the genoa, the large sail on the front of the boat, is larger than the area between the mast and the bow. When in waves like we are in downwind sailing, the sail can slog back and forth chafing itself against the rigging and the mast. It also makes a horrible noise, and slows the boat down while doing it. We decided to rig the whisker pole, and were doing great until we realized that somewhere in all of the putting together of the rig and the whisker pole we had the wrong size fitting on the mast, and the pole is not currently usable. We are not completely sure how this happened, but suspect that the correct sized mast fitting was left and the wrong sized, (but much shinier), fitting was put on instead. As they look almost identical, we hadn’t noticed that the switch had happened until now. After looking in the various compartments that hold rigging pieces on the boat we realized that we did not have the correct piece for the mast. As we were very worried about the slatting of the sail when broad reaching, we had to come up with an alternative.

We stopped and looked at the situation for some time, and decided to rig an old fashioned solution, from the days of fishing schooners in the Chesapeake bay (1830’s). We attached a snatch block to the end of the main boom and routed the sheet for the Genoa through the snatch block, to the spinnaker block on the back of the boat then forward to the genoa sheet winch. This holds the sheet out and keeps the sail from collapsing when we roll side to side in the swells and waves out here. However the sail shape was pretty poor with the top of the genoa twisting off badly, so we used another line and snatch block to rig a barberhauler (Yes that really is a word!) and pull the clew of the sail down to reduce the twist off at the top. So here we are two and a half hours later running under full Genoa in less than 10 knots through a 6-8 foot swell without the genoa beating itself out against the mast and the rigging.

Today the wind backed more and our course is more downwind, a very broad reach. It also dropped to about 10 knots or less. The current weather data we have says that it should pick back up on Sunday afternoon again. The motion of the boat over the last few days has made moving about more difficult and even sleeping while sliding in your berth or your skin uncomfortable. Latest weather forecasts that we have continue in the same way for a few more days. The upside to the wind and the quartering seas though is that we are moving right along at better than 6 knots speed over ground.

Breakfast was oatmeal, lunch a very yummy fried rice made by Melissa, and we are thinking of two rather large cheese pizzas for dinner. The motion of the boat is comfortable enough that we should be able to accomplish that without too much trouble.

Some of the crew have taken showers, and I think I will head up to do the same. 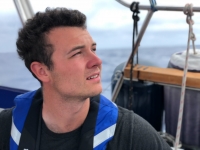 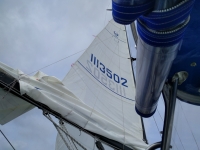 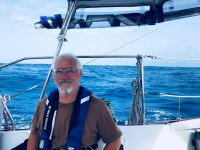