The Cormac Incident, Part One

The Cormac Incident, Part One 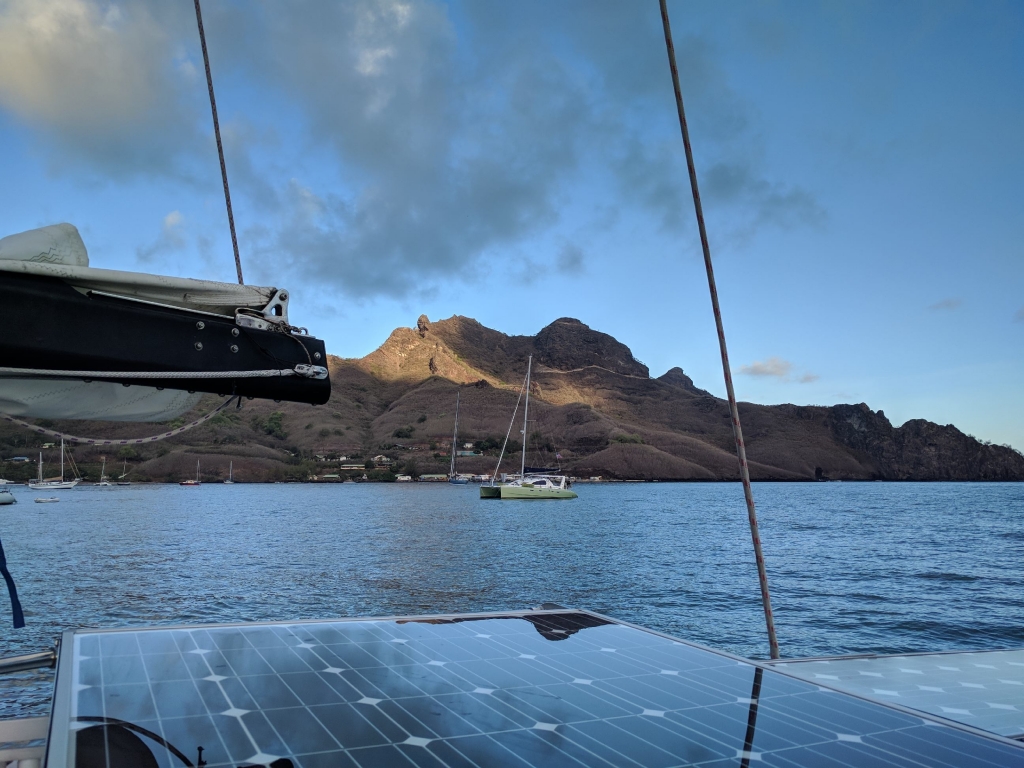 Aiki was safely anchored in Taiohae bay on Nuka Hiva in the Marquesas. While the anchorage tends to be a bit rolly, it is a safe and secure anchorage. The rugged peaks rise steeply, unable to hide their volcanic origins, rough and rugged. These peaks create the valley which extends down past the surface of the Pacific Ocean and forms the anchorage. Like all of the marquesas, the stark beauty of the dark black volcanic rocks and the deep reds of the soil contrast with the deep dark green of the trees, bushes and foliage which covers every inch of the islands it can get a toe hold in.

Cormac and Guy spent the first part of the morning playing guitars together, both enjoyed it greatly. It was nice to have a day free of boat projects, with everyone well rested.

Alex, Adrian, Cori, and Ben off of other boats called on the VHF and asked Cormac if he would like to go for a hike. He readily agreed, packed a lunch, was picked up and taken ashore to go hiking.

At 2:00 or so Sebastian, Liisa, and Steve came over from the boat Silver Moon, and we told sailing stories and just enjoyed visiting. Around 4:30 Cormac tried calling us on Facebook Messenger. The call didn’t go through, so we tried calling him back unsuccessfully. Guy figured he needed a pick up from the quay, and jumped in the dinghy to go get him.

Cormac wasn’t on the quay when Guy got there, Jacob was working with the incredibly slow internet at the small café there, and told Guy not to worry that they were still hiking, and when they returned he would bring Cormac back to Aiki. Guy felt that something might be up, as this was a strange set of events, but figured that Cormac was probably calling to see if he could pick anything up from the store.

Guy headed back to the boat, and the visit with the crew of Silver Moon continued. Shortly after they left, Adib off of Andorra came over in his dinghy, and announced that there had been an accident with the hikers, and that the shorter male hiker had taken a really bad fall, and had broken bones. He then observed; “Cormac is a lot shorter than Ben.”

About the same time as Adib’s visit Guy’s phone got a message from Cormac; “I had a bad fall, I’m ok but my body is a bit worse for wear. The rescue team is on the way. I will be at the hospital tonight, multiple broken bones. Don’t worry Andy (Cormac’s Mother) won’t blame you! I guess I am not horseback riding tomorrow….” Andy was probably mentioned because when Cormac had left the day before for an adventure Melissa had told him, “Don’t do anything that will make me call your mother!”

We jumped in the dinghy and headed to shore to the hospital with Cormac’s passport, unaware at this point it would be hours before we would see him. At the Quay we met up with Alex, Adrian, and Sebastian. Adrian and Alex told us that while they had been on the first part of the hike, they had felt the terrain was much too difficult for them as it had turned from a hiking trail into a goat path. They had broken off from Cormac, Cori, and Ben and had headed back to the quay several hours earlier. They did not know that there had been an accident. Alex and Adrian, along with Sebastian, would come along and translate at the hospital for us.

Guy started communications with Cormac’s parents which he would keep up throughout the following three days. Having cell phone coverage in town made communicating with them possible. Most of the messages were texts, but occasionally their need for information or our need to have data to provide the hospital staff made a phone call a better tool.

The walk to the hospital is a short one, and once there we were told that the rescue had just started, and that Cormac was not in an easy place to get to. It would be several hours before they got to him, and several more before they had him safely down to the hospital. All of the communications between us and the hospital were made much easier by having three translators along with us. Guy explained to Alex, Adrian and Sebastian that we would like to have a translator throughout what was looking to be the entire night, and that if they wanted they should all probably take shifts, otherwise no one was going to get any sleep. All of them decided that they needed to stay with us through the whole night.

One of the nurses took Guy aside, and in the best English that he could muster very carefully informed him that these accidents very rarely turn out well. With a shrug he headed off to his other duties.

The hospital is a small one, constructed as a series of small buildings around a central courtyard. There are maybe twenty beds, an x-ray center, and a small operating room. Most of the rooms, with the exception of the single-bed emergency room, the x-ray room, and the operating room, have no air conditioning. The windows of the rooms are open to the tropical air, and the constant noises of the local free roaming chickens. We see several other patients while we are there, most are pregnant women waiting to give birth, and a few men who are walking around with various parts bandaged from accidents. The head nurse is polite but insistent that the entourage has to go somewhere else for a while.

We leave the hospital and head back to the quay, where we can watch the lights of the rescue party heading up to where there is a light which must be Cormac’s position. Even from this distance we can tell that Cormac is indeed in a very steep section of a saddle between two mountain peaks, and that it is slow going getting to him.

There are about thirty local Marquesans involved in the rescue party. The workforce of the rescue party are recruited by the Gendarme going to the houses of the locals that he knows have strong young men that he thinks are good with directions, and telling them that they have to go rescue someone. Those that are chosen are not given the opportunity to decline the invitation.

We watch from the quay as the first lights converge on Cormac. This is Ben and Cyril, a sixty year old doctor still dressed in his white hospital uniform and carrying a hundred pound pack of trauma supplies with him. The mountain is so steep that both he and Ben spend a lot of time tripping, sliding, and falling on their butts getting to Cormac’s position. Cyril’s uniform is encrusted with the dark red volcanic soil and green stains from crushed vegetation by the time he reached Cormac’s position.

When the lights of the rescuers reached the lights that we thought were Cormac’s position, we headed back to the hospital to see if there is any communications happening and if we could get an update on Cormac’s condition.